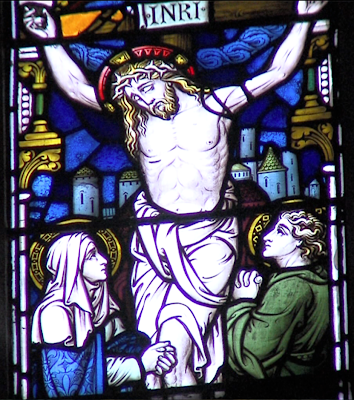 Fridays of Lent - An Introduction


The Seven Last Words of Jesus

We have all used the expression ‘famous last words’ and indeed may be familiar as with the famous last words or epitaphs on a headstone of a famous historical figure.
If you have been by the bedside of someone you care about as they lie dying in the last weeks and days of a terminal illness, you may recall and treasure their last words, your last conversation with them. They are charged with meaning and emotion. There is a strange privileged bond when you are specifically addressed by them with others present. They ask for you, and you draw nearer so that they can see you and hear you. Later, after their passing, you pause to remember those intimate moments you had alone with them or with others.

We treasure the last words of Jesus, addressed to the Father and to those around Him on the Cross, It is said that people die as they live – and Jesus’ last words reflect the continual intimacy He had with His Father as well as His continuous selflessness towards others.
Jesus therefore died as He lives, ever giving of Himself.
[The Latin word for cross is crux, which we use to mean a sort of contradiction or paradox or problem. For us Christians we are constantly in tension – that of satisfying the fulfilment of our vertical relationship with God and our horizontal relationship towards those around us. Heaven is our goal and prayer is the key to the Father’s heart, yet we ‘prove we are Christians by our love’. This tension manifests itself in the extremes of the risk we run in the vertical dimension of our spirituality – in the joint dangers of isolationism and escapism in prayer-life on the one hand, and the other in the horizontal dimension - of compulsive activism for its own sake leading to burnout and doubt, as well as becoming no more than ‘cymbals crashing’.
Jesus on the Cross is the supreme model of the balance of the vertical and horizontal – offering Himself to the Father on our behalf in a communion of love with God and us for God’s sake. We can learn much from reflecting on the Cross of Christ. The Cross becomes the template as it were on which we make perfect the tensions in our lives in our attempts at discerning as well as achieving the proper balance between prioritising our love for God and its demands, and our efforts in striving to love our neighbour as ourselves.] The 7 ‘last words’ of Jesus, in particular, as they are traditionally known, are both heavenly-directed to the Father and yet ever mindful of us for whom He died.
It is worth pondering these words and taking our time over them. I suggest that because Lent is a season that consists of 7 Fridays, culminating of course in Good Friday itself, we would do well to focus our attention on each of the 7 last statements, one Friday at a time. We could allude to just one of the statements in the course of our day. Friday is a particular call to remembrance of the Lord’s Passion and we are invited by the Church to meditate on the Passion in various traditional practices. Among other favoured expressions of devotion and asceticism, Christians have much food for thought in the implications of these 7 statements in particular.

Friday One of Lent

‘Father, forgive them, for they know not what they do’

‘Father...’Two of Jesus’ last statements are addressed to the Father. This should not surprise us, not only because Jesus whole life and mission, even His ‘food’ was ‘to do the will of the Father’, His first obvious recourse in prayer in the past, and now in the midst of so much pain and anguish was to say ‘Father’.

There is a story told in the life of a famous heroic Frenchwoman, who was twice awarded the highest military award, the ‘Legion d’Honneur’ for services rendered to wounded and dying French soldiers in both World Wars. In the course of her career, she once came to the assistance of an enemy German soldier who was shot having been pursued all the way to the inside of a church for sanctuary. She held him in her arms, and those who had fired the bullet that ultimately killed him, stood strangely respectfully at a distance as she cradled him. The dying man whispered something in her ear, and then he fell limp and died. Afterwards she was asked what he had said. She replied, ‘it doesn’t matter what side a man fights, his last words are always for his mother.’

It became ‘second-nature’ therefore, to Jesus to address every ‘need’, thought and word to the Father, always with Him in mind. God IS love. We have no satisfactory, earthly, human comparison for the closeness of the shared nature of the two Divine Persons, but as we re-affirm, the spirit of love between them is The Holy Spirit, the Third Person of the Blessed Trinity. He draws us in to the very life of God and to ponder this love relationship. We grasp at comparisons that fall short, but the bond of love between Father and Son, Pope John Paul II taught, is mirrored least imperfectly (!) in the communion of love between spouses, and the fruitful union that leads to the conception and birth of a child mirrors inexactly, to be sure, the Trinitarian life and love of God.

Jesus said to Philip –‘to see Me is to have seen the Father’. Jesus addresses His Father as Abba, a term akin to ‘Daddy’. It would be a useful exercise for us sometime to skim through the Gospel accounts to look at all the references to Jesus addressing His Abba, and teaching us about His Father. Above all as we now know, most importantly of all, He is OUR Father too.

This knee-jerk, automatic thrill that comes with the mention of the name of the Lover on the lips of the Beloved is akin to the utterances of Abba on the lips of Jesus. This relationship transcends our understanding, but becoming Man for ‘us and our salvation’, Jesus teaches the love of the Father for all of us, His adopted sons and daughters.
On the Cross, Jesus’ utterance of Father follows closely on much of His teaching about His relationship with the Father in the Priestly Prayer, so-called, of Jesus as recounted in John’s Gospel. Jesus’ heart-stopping words re-read slowly and ponderously, are, if you will, an eavesdropping into the prayer life of Jesus, and in fact could be a second answer, a more prolonged one at that, to the disciples’ earlier request ‘Lord, teach us to pray’. It is, I repeat, the Spirit in our prayer, who teaches and enlightens us on this intimate union of Father and Son.

The second aspect of this ‘tip of the tongue’ love is the intrinsic link that exists between addressing the Father and the conferring of forgiveness: ‘Father, forgive them’. Just as in the Our Father prayer – forgiveness is crucial. An absolute requirement to the obtaining of God’s forgiveness for ourselves is our granting it to others around us. It is the work of a lifetime to establish free and full forgiveness towards all. The effort must be made. While we can readily call to mind our own grievances over harsh, hurtful words and actions and omissions from others, we must pause to consider the effects of our words, action and similar neglects in the lives of others. Therein lies the first lesson and task of Lent – seeking forgiveness in reconciliation, sacramentally and relationally.

'..they know not what they do’

To forgive is to ‘overlook’ and never to call to mind the sins of others against us. It is to excuse and to pardon, for ‘they’, whoever ‘they’ may be in my life and yours, ‘know not what they do’. The same ‘they’ may not realise, whatever the level of understanding, deliberateness, or clarity of intent originally, what they have done to harm us, with perhaps years of lasting after-effects of hurt and pain. This excusing and pardoning is among other things, in effect, ‘what love is’ (1 Cor 13). Jesus’ loving plea on the Cross makes the seeming impossible for us, possible. It brings us back to the very first sermon of Jesus: ‘blessed are the merciful, they shall obtain mercy’.