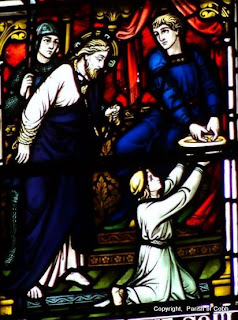 This feast has its origin in 1920 when the Pope at the time realised that there was the threat of much social chaos in Europe – in fact it was already present, at the overthrow and assassinations of kings and emperors in Portugal, Spain, Austria-Hungary and Russia – in the previous decade. This present decade 2010-2020 marks the centenary of much disorder and war in Europe. Hence the decade witnessed the overthrow and destruction of the royal houses of Europe – or if they continued to exist - were all reduced at best to being symbolic figureheads where they continued to ‘reign’. Examples such as  England, the Low Countries such as the Netherlands, and Scandinavia continue in this line to the present day. This massive upheaval in a short space of time changed the face of Europe and ushered in a new era for the first time in centuries, a ‘brave new world’ was born. People’s potential blind loyalty to the newly founded States, however, be they republics or parliamentary democracies (and Communist as well as fascist dictatorships) was in real danger of eclipsing their prior loyalty to God’s will and kingdom. Indeed the Church was suffering already and would continue to suffer anti-clericalism and persecution in the backlash against the unfortunate prevailing clericalism up that point.
The remedy or attempted remedy was to establish the Feast of Christ the King, as a reminder to all Christians, of Christ’s ultimate Lordship over all people and history, and His universal and everlasting reign - to remind us of our ultimate calling and destiny if we choose to accept it.
On the plus side, it is a reminder that in the world religion and faith have a social dimension, as well as obligations binding on its members and citizens. This was a new era for the Church also as its social teaching came into its own. However, to this day many Christians struggle with unjust laws of the State concerning marriage and the family; the protection of the right to life of society’s most vulnerable members; as well as the place of religious education that is denominational in a pluralist society.


The Kingship of Christ does not have any physical or geographical boundary. But He is the universal King and, as the hymn has it, He is ‘king of all hearts’. This may perhaps seem a romantic, symbolic or remote and abstract concept to us, even ‘flowery’ and not particularly appealing as it seems a bit up in the air.


Yet the prayer of all Christians is the Our Father, where we always say Thy Kingdom Come, and then we say thy will be done. They are actually one and the same request or petition. God’s kingdom can be seen and is manifested where His will is seen to be done in individuals, families, communities and in institutions and societies at large. It does not preclude or exclude the State but where state laws abide by the natural law and respect the dignity of all citizens, the State is not threatened rather its workings are more orderly, peaceful and efficient. We are promoting God’s kingdom by following His commandments and obeying the just laws of the State. But it goes beyond a mere minimalism of conformity, as in the statement I have heard so often ‘I don’t harm anyone’. We must go further and ask and challenge a statement like that with, ‘well, life is about what you do, not what do you not do.’


The kingdom of God is within – it is in our choice to want to do His will above ours, or at least to conform what we want as we consider if it is what God would truly want for us. And that is not the abiding by a mere checklist of commandments and the avoidance of the seven deadly sins, but a real effort at virtue and sanctity. Christianity, truly lived, is not for the faint-hearted.


The kingdom of God, in the words of the Preface for the Feast tells us that it is meant to be


‘...an eternal and universal kingdom,


A kingdom of truth and life


A kingdom of holiness and grace,


A kingdom of justice, love and peace.’


Therefore do I practise truth, do I reverence life, do I strive for holiness of life in prayer, appealing to God for the graces I need to remain always faithful to Him, do I hunger and thirst for justice, do I exercise a love that is patient, kind, forgiving, and am I a source of peace?  In the measure that I am all of these things, that is the measure that I am a true representative of Christ in my daily life, an ambassador as it were, of His Kingdom on earth.


Finally, we cannot really effectively have Christ as our King if we do not have Mary as our Queen. This is not to take away or diminish the Lord’s rule or to suggest that Mary does not remain a creature. Yet she has been elevated at her coronation - as the woman of Revelation chapter 12, depicted with a crown of 12 stars around her head, clothed with the sun and the moon at her feet- and we celebrate her Queenship, her coronation, each August 22nd. We do not celebrate that feast with as much prominence as Christ our King, but the Kingdom of God – sometimes called the reign of God, is about the Will of God. And the one who manifested that will perfectly was Mary who said ‘do whatever he tells you’ at Cana – her last recorded words. She is our role model and as the first to enter the Kingdom of Heaven body and soul, she calls us to follow in her footsteps. She played her part and continues to do so through her maternal protection and intercession for all of us.


Pray for us, O Holy Mother of God, that may be made worthy of the promises of Christ.
Posted by FrJohnCobh