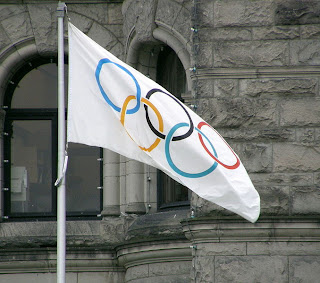 
As we look at all the athletes at the Olympics and admire their lean musculature, their drive and determination to succeed and win, the world looks on in awe. Some sports we see only every four years. We have only an inkling of the hard graft and daily diet and exercise these athletes live up to and practice. There is disappointment in losing even if there is some consolation in participating in such a monumental world event and representing your country.


Runners know all about daily effort, not flagging in discipline, training in all weathers and moods, leading healthy lives, abstaining from certain foods, living a balanced diet, undergoing training and toning of certain muscles required of their discipline. It is why the majority of us are spectators!


Such commitment, so many sacrifices! Families of athletes know the tunnel vision required of a son or daughter, brother sister or spouse. Athletes are in it for the long haul, and despite the fact that newer names and younger men and women are going to follow and succeed them in matter of a few short years, and that there are age limits to peak fitness and performance, at least for a time there is a sense of achievement and personal satisfaction, as well as the secondary benefits of celebrity, corporate sponsorship and fame. Problems such as injury and imposed rest from the sport as well as losing by a narrow margin can be the heart-breaking unforeseeable drawbacks and frustrations in such a focussed life.


What has this to do with us?


The Christian life is also a race of endurance and long-term commitment. On the spiritual plane there are many sacrifices required of us. We must live a completely focussed new way of life – one that involves commitment to duty, daily prayer, fasting, almsgiving, virtues such as courage, patience, perseverance (fortitude), forgiveness, chastity, humility, temperance, diligence.  Catholicism, truly lived, is not for the faint-hearted!


These virtues are often lived out by athletes on a purely human and non-spiritual level, although that is not to say that some athletes are devout Christians and can often be motivated by their faith in God and the parable of the talents. We think, for example, of that famous scene in the Olympic movie ‘Chariots of Fire’, the Scottish athlete, Sandy McGregor, a preacher, refused to run on the Sabbath. He switched athletic events to avoid the Sabbath. An admiring American athlete hands him a note before he limbers up for the final race – it contains a quotation from scripture –‘the man that honoureth me, I shall honour’ (1 Sam 2:30). McGregor wins the gold. What a great movie moment! In our day,  I  greatly  admire Katie Taylor’s example for her faith, and as one hand was raised in victory at her first win in London on August 6th, the other hand was pointed a finger to heaven.


Sportsmen and women are continuously motivated by the drive to excel and to win. They do not lie back in idleness. The rewards are the accolades, trophies, recognition, as well as fame in their sport and native country. We all take just pride in their success and are caught up in the emotion and buzz in the build-up to their performance.


For St Paul, despite the many ‘hardships, weaknesses, insults and persecutions’   (2 Cor 12:10),he and his disciples endured, it would all be worth it in the end: ‘Do you not realise though all the runners in the stadium take part in the race, only one of them gets the prize? Run like that –to win. Every athlete concentrates completely on training, and this is to win a wreath that will wither, whereas ours will never wither.’ (1 Cor 9 :24-26)


We should not be at all surprised – though perhaps we continuously are – at the sacrifices a truly committed Christian life requires. Paul teaches us and admonishes us – expect trial and hardships...but God comes to our aid: ‘God will not out you to the test beyond your strength, but with any trial will also provide a way out by enabling you to put up with it’ (1 Cor 10:13) . Let us persevere, especially despite our frequent falls and the discouragement we experience at our own weakness. The worst fate of all is disqualification – from eternal life. Paul in his humility was well aware that he had to practise what he preached ‘so that is how I run, not without a clear goal, and how I box, not wasting blows on air. I punish my body and bring it under control, to avoid any risk that, having acted as herald for others, I myself may be disqualified’ (1 Cor 9:26).
If we have fallen as runners in the Christian race, let us get up again. What energised Paul? His relationship with the Lord Jesus:  ‘when I am weak, then I am strong, for I can feel Christ’s protection over me’ (2 Cor 12:9), and my personal favourite: ‘The love of Christ urges us on’ (2 Cor 4:14).