Reflections on the Gospel according to Mark 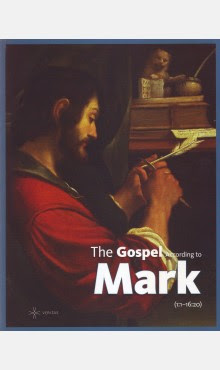 This weekend, November 26th/27th sees the beginning of a new Church Year as we begin Advent. The Gospel for most Sundays of the Year B, as it is known, is taken from the Gospel according to Mark.

The phrase ‘the Gospel according to Mark’ is important because it reminds us that there is after all, only one Gospel, or Good News, but 4 versions of it, admittedly parallel and overlapping.

To use a modern example: We often see, for example, a ‘breaking news’ story as we flick channels on BBC, RTE,CNN, Fox News, ABC etc. the same images flash before us, say, for example, the riots in Egypt or the uprising in Libya that oversaw Col. Gaddafi. There is one news story rolling along the ticker tape at the bottom of out TV screens, but different tellings, and different details come to light.

Mark’s version of the life, ministry death and resurrection is the shortest version. I recommend highly reading the entire Gospel book in a single sitting. It makes a powerful impact, and takes 45 minutes to read through. Mark writes in a very dramatic, direct and simple style, with much of the dialogue and narrative in the present tense. His account is in contrast to Matthew who pads, as it were, to show the fulfilment of Old Testament prophecy, or Luke who had a Gentile audience in mind, or John’s highly theologised version with few miracles, but long rich discourses of Jesus. It is worth mentioning that John’s Gospel is recalled in several Sundays of the coming liturgical year, especially John, with the Bread of Life discourse in the summer Sundays.

It is a long-standing tradition that Mark’s account was the first to be written and that he used Peter as his principal journalistic source. Mark is not an Apostle, and his name does not feature in the Gospel account that bears his name. He is mentioned, though, in the Acts of the Apostles.

What is interesting is the way Mark excludes the Infancy narrative and we enter at once into the drama of the highlights of Jesus’ life and death. Fully one-third of the Gospel is taken up with the Passion narrative.

The phrase, ‘immediately’, occurs 40 times in the Gospel of Mark. This gives us a sense of urgency and hurry as we read. The work of Jesus is one of dramatic urgency with immediate effect. This gives the reader a sense of wishing to enter into an automatic response of wanting to accept Jesus’ message and identity straight away. Jesus is moved by the Spirit immediately after His baptism into the wilderness. The parable of the sower of the word contains several instances of the word ‘immediately’ for example.

The Gospel is clearly divided into two main sections, with the chapters 1-8 focussing on establishing Jesus’ identity in his hearers and followers, and chapters 9 to 16 leading inexorably to Jesus’ Passion, death and resurrection. The miracles Jesus performs lead people to ask ‘Who is this man’ (that he can forgive sins in chapter 2, that he can calm the storm in chapter 4); and ‘where did this man get all this?’ He is identified uniquely in Mark with the title ‘the son of Mary’. The conflicts with the Pharisees from the outset do not bode well of course for Jesus’ fate, as it were.

The climax comes on chapter 8 with the revealing of what scholars call ‘the Messianic secret’. At a place called Caesarea Philippi Jesus asks his disciples: ‘who do men say that I am?’ This straw poll is then followed by the more challenging question, which is asked of us too, ‘who do you say that I am?’ With Peter’s confession of faith that ‘You are the Christ’ Jesus urges them to tell no-one of this. Then Jesus predicts for the first time to his disciples His impending Passion, or if you will, Jesus then tells us Himself who He is, the awaited Messiah. There are two later predictions. Immediately in the next chapter of Mark (chapter 9), at the Transfiguration, the Father confirms Jesus (for our benefit) as ‘His beloved Son’, and we are urged to ‘listen to Him’.

We might ask ourselves why in so many occasions Jesus encourages silence in His followers as to His true identity. Even the demons exorcised from poor wretches recognise Him as the ‘Son of God’. There are several reasons: it was not the appointed time, Jesus does not want to perceived as having a political, military Messianic plan, or as a magician who performs ‘on tap’. He wishes to confirm as well as elicit greater faith. Many of the wonders He performs take place to confirm faith, rather than to force it out of nothing. The paralytic is cured in chapter 2, because Jesus rewards the faith of the man’s friends.

The title Mark uses for Jesus from the outset is ‘Son of God’, and Jesus refers to Himself as the ‘Son of Man’. We are drawn in, then, gradually to the puzzle or mystery ourselves so that we too might come to a similar conclusion of faith in who Jesus actually is, despite our timidity in the second part of the Gospel in the face of the predictions and inevitability of the suffering the Messiah is set to undergo for our sakes.

Enjoy the Year of Mark, beginning this Sunday, and read Mark for yourself.